Today I'm announcing my word for this year, but I haven't written a wrap up post for last year's word. I'm okay with that, which is actually a fairly good summary of what I learned with rest. The flip side of that word however is laziness. I flirted with that more than once and called it rest. It wasn't. It was lazy. It seems odd that I struggle with laziness when I am so busy. I find that I attempt to combat that laziness with things to do. That's a good thing mostly. Sometimes it isn't laziness though, it is rest and that is important for this introvert.

I briefly thought about rest being my word for this year as well. It didn't seem quite right though. I wanted a word that would challenge me, a word that was different, a word that would make people ask questions. 2014 was coming to a close and I still didn't have a word. Then the last Sunday morning of 2014 we sang a hymn and a word caught my eye. I searched the word in my Bible app. I wrote down several verses. I reread the verses and eliminated all but two. I then found myself in a dilemma. Are two verses allowed for my one word? Then I realized there were no rules except the ones I have made up. So if I want 2 verses, then I can have two. With that decision, my word had been chosen. 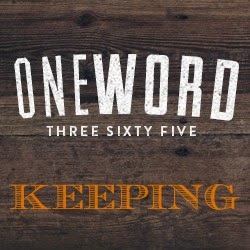 These verses are about the keeping I will be doing and the keeping He will be doing. I feel like I have grown and learned and gained so much from last year. I don't want to lose those things, but I also don't want to lose what I have here. I want to try to hold on to it all. I can't say that I am ready for it because I'm a bit scared of this word. It is a word that requires a lot from me.  I'm challenged by it, but I know it is the right word at the right time to move me in the right direction.

Email ThisBlogThis!Share to TwitterShare to FacebookShare to Pinterest
Labels: one word