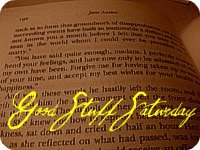 So much goodness today!

Articles that I thought you needed to read

WorldVision - Lopez Lomong's childhood story of terror  WARNING: This one will stick with you!

The Church of No People - Real Marriage: The 1950's pre-feminism kind   YES!  This is so exactly what I think, but can't ever put into such great words.  God help us have this!


We do need to go back to “1950s” “pre-feminism” marriage.
And if that’s got you all hot and bothered under your housedress, just keep reading.

but there is more. boys, and men, want to be wanted. no, they want to be needed. they like to be useful and respected and in spite of how the world has emasculated its men, they want to be, as john eldredge says in wild at heart, warriors.

BBC News - Viewpoint: Time to look beyond Mexico's drug violence  It is great to see other people think Mexico isn't so bad.

If Mexico were a stock, now might be the time to buy. The country has been severely under-valued in recent years.
Despite high rates of crime and violence elsewhere in Latin America, the media tend to focus relentlessly on Mexico's drug war.

Shawn Smucker - So I stopped eating   A haunting story of a little girl and food.

We were moving, for the tenth time in seven years, and I’d seen a bad word on the side of the grocery store wall (but had no one to ask about it) and Mum didn’t tell me I was beautiful and I couldn’t go to public school and Dad was never home, so I stopped eating.

Goins, Writer - Art helps us deal with suffering I know this in my head, but I can't seem to apply it to my talents.

Being an artist means to be generous. It means God has given you a gift you need to share with the world. And the world is a messed-up place. It’s hurting and confused.
The world is suffering.
Art helps us make sense of the suffering. Not by spouting off cliches or offering trite platitudes, but by speaking to that inner voice inside each of us that says,

Magnolia Lane - What if??  A new blog I discovered that speaks to exactly where my heart is now.

But as far as money is concerned, I don't have a giving problem, or a greed problem. I have a poverty mindset problem. I have a hard time letting go of what we have because I feel like its all we will get. I think very small when it comes to money. I obsess over the numbers, I constantly move numbers around in my head. I base my mood on the bills and if they are paid or not and I definitely worry over things that haven't happened yet.

Compassion - Three Unexpected Surprises - The third surprise of the day was also waiting there for me. Josue has a daughter of his own now, Benji. What a delightful surprise to meet Benji and to hold her in my arms!

We traveled a bit farther to Josue’s home, where I realized that conditions are not easy for his family.
Although Josue is qualified to repair the local water system, it is only a voluntary position. But he has his education and is a strong Christian.


Courtesy of Compassion International: http://blog.compassion.com/three-unexpected-surprises/#ixzz21BLk72hW
Stuff Christians Like - Forgetting how crazy God is about redemption  - This makes the transformation of Saul into Paul so much more amazing.

“Do you ever wonder is Saul of Tarsis would be among them? Maybe they will see a blinding light in the way home.”
Wow, when you think about that, he raises an interesting point.
The protestors seem peaceful compared to Saul (Paul.)
The protestors ask authorities for permits to march. Saul asked authorities for arrest warrants.
They yell hateful slogans. Saul yelled murderous threats.
They give approval to protesting. Saul gave approval to stoning.
They persecute with words. Saul persecuted with death.

There are 168 hours in a week.  We sleep for about 60 of those.  That leaves 108 hours.  Work takes another 40.  Workday lunches take another 5 and commuting takes another 4.  That leaves us with 59 hours.  On average we spend 41 hours a week on the internet and/or watching TV.  That leaves 18 hours.  And we haven’t even taken out the time for fixing the gutter of that leaky faucet.  Lets just say 5 hours a week for home repair or misc repairs.  That leaves 13 hours a week.  Sounds like a lot of time, that’s leaves less than 2 hours a day.  Well, you gotta eat sometime, and if you eat you gotta go to the bathroom.  Whew!  That’s a busy week.  But wait!  When did you talk to our spouse?

Grit and Glory - pure & genuine religion - They go in to each community with an end-goal and an exit strategy. They aren’t there to be a crutch or even to provide hand-outs. They build capacity in both people and communities, leaving them self-sustaining and thriving. I really was astounded to see the depth of Food for the Hungry’s work. They have over 430 staff members in Ethiopia alone. Oh—and only two of them are American. Their staff are so loved in the communities where they work. Countless children and families raved to us about their FH social workers.

Shawn Smucker - Sometimes you have to be a little bit crazy  - It was good to hear that other people are crazy too.

“You know, to live this life you’re living, make these kinds of decisions, you have to be a little bit crazy,” he said. The worrying thing is, his face showed no sign of amusement.
I nodded and smiled.

The Esau Project - Don't want to miss a thing - I haven't been listening the right way.  I need to work on that.

Saturday was July 14.  It hadn’t rained here since May 6.  It had been so long since I’d heard the noise that I’d forgotten what it sounded like.
I wondered if I was that way with God.  It seems like it’s been a while since I’ve heard Him speak.  Or is He speaking all around me and I’ve just forgotten what to listen for?

Discipulus - The parable of the little life saving station This makes it all seem so obvious.  Not easy, but obvious.

Many lives were saved by this wonderful little station, so much so that it became famous. Some of those who were saved, and various others in the surrounding areas, wanted to become associated with the station and give of their time, money, and effort for the support of its work. New boats were bought and new crews were trained. The little life-saving station grew.

Sayable - Why I don't tithe This makes SOOO much sense!

I just started giving. Last week I was suddenly gripped by a panic, I know I've given a lot this year, but what if I haven't reached the magic ten? What if God is disappointed in how much I've given or how much I haven't given? And immediately I was reminded a few things that have been my barometer for giving this year.

It’s the same way with Christ. We need a running partner. This may be in the form of mentors, Bible studies, discipleship, or even just fellowship with believers. But we need to have someone who will push us as we push them (even if we don’t feel equipped or ready to help them). Someone who will teach me as I teach them. Someone who will challenge me to run harder after Christ as I challenge them to do the same.

Articles that just stuck with me and I don't know why


Beta Christian - It's going to be a good day - I head out into the world and my ear is ringing. It’s not a normal ringing but more like a buzzing sound. I cup my hand into it and use my palm as a plunger and pull on it. I feel a sting inside the ear. Ugh, just what I needed. If you can’t get rid of the ringing, I might as well drown it with music. I put my Project Red Beats on my ears and open my Spotify app on my iPhone.