So it's been a while 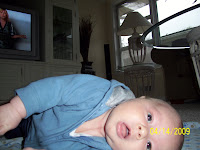 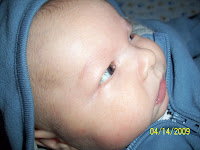 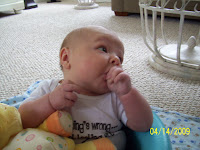 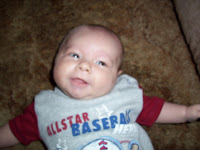 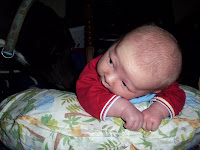 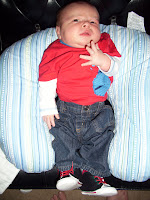 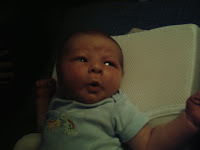 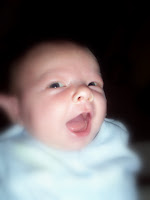 Life is finally settling into a routine, so maybe I can post a little more regularly now. Ben had his month shots earlier this week. I wasn't there and Drew said that was a good thing. Drew also said that Ben settled down just as soon as he picked him up again, so I would say that means he did good. I was reading the paperwork we got with his 2 month visit and it said something about most babies giving up a late night feeding. Ha! Not Ben. He eats at about 10 pm and then again at 1:30 and usually at 4:30. I think at least one of those qualifies as a late night feeding. He likes to eat! He's normally pretty good about going back to sleep quickly. This week was the exception of course. He got up and stayed up after his 4/4:30 feeding Thursday and Friday this week. Of course he started to doze back off at like 5:45 or 6 when it was time for me to get up anyway. So I had a long couple day. Last night after his 1:30 feeding he didn't go down easy either. It took me about an hour and 15 minutes to get him to go back to sleep. But I think he slept until 7 after that, so that was good. He's sleeping in his swing now. That's about the only place we can get him to nap. He's not gone down for naps very easily this week either.

Breastfeeding is going well. It took a few weeks, but I think I've got it down now. I really do enjoy it. If you would have asked me about a month or so ago, I wouldn't have said that.

A few other things, he started rolling from his tummy to his back at week 6. So much for tummy time. He loves Shushybye and Tech the tractor on BabyFirst TV. He LOVES music and people singing to him. Drew told me that yesterday he was tapping his fingers on his bottle to the piano music that was on in the background. Last night he was bopping his head to the music on TV. Maybe he'll be a musician. If so, he definitely didn't get it from me! I've started drinking soy milk instead of regular milk and it seems to be helping his gas and his reflux. He's also on medicine. So between the two, that's really under control.

I was thinking of a few other things that I wanted to post, but as soon as I think of them, they go away. I'm not sure if that's just a part of motherhood or I'm just that tired. I'll post more if I think of what I wanted to say.

OH! He got easter pictures at Sears and at Fletcher's in Fairfield. He did great at Fletcher's, except for not looking at the camera. He wasn't too happy at Sears, but we got good pictures. He's really photogenic!

Posted by Andrea at 9:06 AM No comments: Links to this post