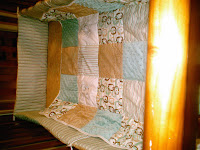 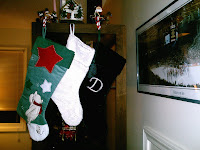 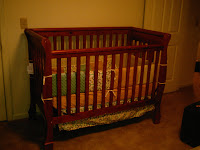 New picture of me, obviously. A couple of his crib and his stocking. We're going to write his name in the red star. I'll have to post another one when we get it done.
I went to the doctor today and everything is normal. Just a tummy check and listening to his heartbeat. Two more at two week intervals and then it's every week. 8 weeks isn't much time.
Posted by Andrea at 7:00 PM 3 comments:

Over the weekend Drew and I went shopping with his mom and got Ben's crib amongst other things. I'll have to post pictures of it and myself later. I don't have them on this computer.

Only 2 more days until Christmas Break. I'm really excited about that. I'm ready to relax for a while. As much as that's possible considering he's never still anymore. It seems like he's constantly moving!

Sorry so short, but I don't have much to report.
Posted by Andrea at 4:41 PM 3 comments:

Friday's doctor's visit was uneventful. I was weighed, blood pressure taken, measured, and listened to his heartbeat. So things are going well.
Saturday, Drew and I had a wedding and I was the official videographer. I haven't watched the tape again, but it wasn't great. I couldn't get the camera back on the tripod, so it gets shaky when I try to do that. I got tired when I was standing, so I had to sit and that was shaky again. The couple said they were just happy someone had taped it. We'll see if they still feel that way when they watch it.
Ben's been kicking more. Now he usually throws combos, not just one kick at a time. Drew said he was surprised I was able to sleep last night because Ben was so active when he came to bed. (I was tired, so I went to bed at like 9:00) I didn't notice though. Now I'm hungry, so I think I'll head home and get something to eat.
Posted by Andrea at 4:12 PM 1 comment:

Once again it has been awhile, so I have lots to say. We have been to Lamaze class twice now. The relaxation techniques have been great! I am learning a little bit about the whole process, but I can't say that I have really been studying it or anything. The first night we learned about prelabor and early labor mostly. Last night we talked about active labor, transition, and relaxation techniques. Drew's really good that them by the way! I just hope I can get half that relaxed when the time comes.

A couple Thursdays ago we had a hospital tour. It was great and kinda scary at the same time. I will be doing Labor, Delivery, Recovery and Post Partum in the same room. So basically once I check in, I'm in that room until I go home. Ben will get to stay in that room with us as well. They have a monitor for him in there and they can see the monitor from their main desk and their break room as well. I thought that was pretty cool. Also we will have 2 nurses, one for me and one for him. I don't think we'll be lacking anything. The nurse we met was really friendly and it sounds like almost all of the nurses there have plenty of experience. I'm really glad we are going with that hospital.

I had a doctor's appointment a couple Friday's ago and I have another one this Friday. All the doctor did was measure my belly and listen to the heartbeat. Everything was normal, so it was a quick visit.

We went back to Fairfield for Thanksgiving. It was GREAT to see everyone again. Drew and I also did the Christmas thing with my family and we handed out Christmas presents to people as well. We got lots of good stuff clothes, bibs, toys, a swing, his crib bedding, a blanket, an extra sheet, a new videocamera, and a web cam. The best things we got were a Fredbird mobile for his crib, a St. Louis Cardinals outfit, and a hockey outfit with bib. Those were my favorite anyway.

A couple more trip notes. On the way out there Ben gave me my first good kick to the ribs. It was around Jasper, IN. I guess he was tired of riding in the car or something. ;) Also Ben woke Drew up one night while we were out there kicking him. He didn't wake me up, but he did wake Drew up. I thought that was pretty funny.

Yesterday I felt his foot for the first time. It was about 5:30am and he was pretty active. I wasn't ready to get up yet though, so I just put my hand on my tummy. All of the sudden I felt a little lump on my side. I thought it might have been him, but I wasn't sure. A second or two later, he pushed harder. It was too big to be a hand or fist and too small to be his head, so it must have been his foot. It was dark in the room so I didn't get to actually see it, but I felt it. I woke Drew up to tell him. He said cool, but didn't move much. Then at Lamaze last night when the instructor was talking about the difference between contractions and the baby pressing on you, Ben decided to give me an example. on the lower right side of my belly it got really hard for a little bit. That time I'm pretty sure it was his head because the hard part was a pretty good size. It was definitely bigger than a hand or foot.

I have another doctor's appointment tomorrow. I expect everything will be good then. I'll see if I can't find some time this weekend to get on quickly and let you all know how that went.
Posted by Andrea at 3:42 PM 1 comment: